My bus arrived into Chandigarh at around 2pm, and I headed over to Yash and Usha’s house for a final lunch before I said goodbye for good (at least for this trip to India). We ate together, said our goodbyes and then Usha took me to the railway station.

This has been more or less my favourite part of my stays with the Chowdhrys every time – the journey to the station with Usha when I’m saying goodbye. Usha is honestly the embodiment of all that is good in India.

Every time I leave their place, we go into her room where she has her shrine, kneel down in front of it, she blesses me and gives me some blessed food. Her shrine has all kinds of images: Gandhi, Buddha, Jesus, Sikh gurus, Ganesh and plenty of others. She believes in one God, and that God embodies everything. She’ll say to me “it is in His remembrance, hari ohm, hari ohm” and variations upon the same phrase. One time she had me singing Que Sera Sera with her (while I was desperately trying to push the words from Joe’s university rugby chant out of my head) because everything is up to Him, we can’t see the future but we have to trust in Him.

Anyway, I get to the train station and it turns out that my waiting list ticket has not been confirmed, which basically means I don’t have a ticket and will get a refund. I try and give the guy a few rupees to let me on the train, but he refuses and I decided 36 hours on a train without a seat wouldn’t be the best experience anyway. After investigating a few other possibilities, including buying a cattle class ticket (the guy thinks I’m mad for this) I decide to knock this on the head and go back to Yash and Usha’s to work out plan B.

As soon as I get back Yash invites me out with his friend, known only as ‘The Brigadier’, to the Defence Services Officers Institute in Chandigarh. Apparently I have to wear a collared shirt (nope), a pair of trousers (nope) and a pair of shoes (nope) so I have to borrow some of Yash’s clothes. Funnily enough, were almost exactly the same size, despite the fact that he’s about 6″ shorter than me. Finally, my short legs come into use!

We pick The Brigadier up on the way, and it turns out that retired Indian army officers are very similar to the British ones. They drink a lot and tell terrible jokes. But he was a lot of fun, and he was very surprised that he was able to engage in conversation to me. He turned to Yash and said “here I am a 70 year old retired Indian army officer, holding conversation with this young Britisher as if we were old friends!” I was quite flattered by that.

The next morning, I worked out after lots of deliberation, including thinking about heading up to Dharamsala to see the guys I left in Manali and possibly the Dalai Lama if I’m lucky, I decided to book a flight from Delhi and stay a couple of extra nights with Yash and Usha. They were delighted, at least they seemed to be, because it meant I could attend their belated 50th wedding anniversary that evening.

I changed back into Yash’s red shirt, grey trousers and brown shoes (he’s quite a stylish chap, old Yash) and the guests start to arrive. Forgive me for the sexist presentation of the guests, (I was only introduced properly to the men and the women as their wives of each man) but our guests were the Chandigarh chief of police and his wife, two doctors (an endocrinologist and a ophthalmologist) and their wives, the Brigadier, a Indian-Canadian hotelier (called Pinky), the ex-chief of the Forestry Department of Punjab (Yash) and an unemployed, British nomad (me). So, quite a qualified bunch, all-in-all, and to a certain extent.

The evening was very pleasant, and interspersed with terrible jokes from my friend The Brigadier. The whisky flowed, the conversation was interesting, even for a group as prestigious as this one, and mostly in English for my benefit. And the food, as always at Yash and Usha’s was excellent, prepared by their helpers Shiva and Gerwin.

At the end of the evening, The Brigadier invited me for a walk and breakfast in the morning, which I gratefully accepted. It’s not often you get an invite like that from such a high-rankings older who has seen active service in so many conflicts, and is fluent in Russian.

After breakfast, he gave me a CD of some Hindi music, a book and a cap from a Hindu retreat he’d been to, and told me that I had to get in touch next time I’m in India because he would love to have me to stay. He said his wife would have been devastated to have missed me coming for breakfast, and if they know in advance next time, they can make sure she is there when I come to stay.

This is typical of Indians. They don’t just want to make sure that you’re comfortable somewhere, and you are being fed. They actively want you in their houses, making personally sure that you are comfortable and you are being fed. In fact, most of the time, the being fed thing is taken a touch to far and you end up (in the words of the wonderful orator, my mother, Elizabeth Calnan, on eating too much cheese) “feeling like you’ve got a rugby ball in your stomach!”

Yash and Usha (both of them this time) took me to the bus station for my night bus to Delhi. It was a sad goodbye. I hugged them both three or four times and told them how much I appreciated everything they had done for me.

I think staying with them reminded me of being back at my second home in Mill Hill with Nana and Grandad where, at least most of the time (except on Mondays which it’s Nana’s soaps night and on the weekends when Barnet haven’t done so well, i.e. every weekend) you’re made to feel like you belong there, or in the immortal words of The Artful Dodger (and at the risk of sounding extremely cliched), at home, one of the family, well in and part of the furniture. 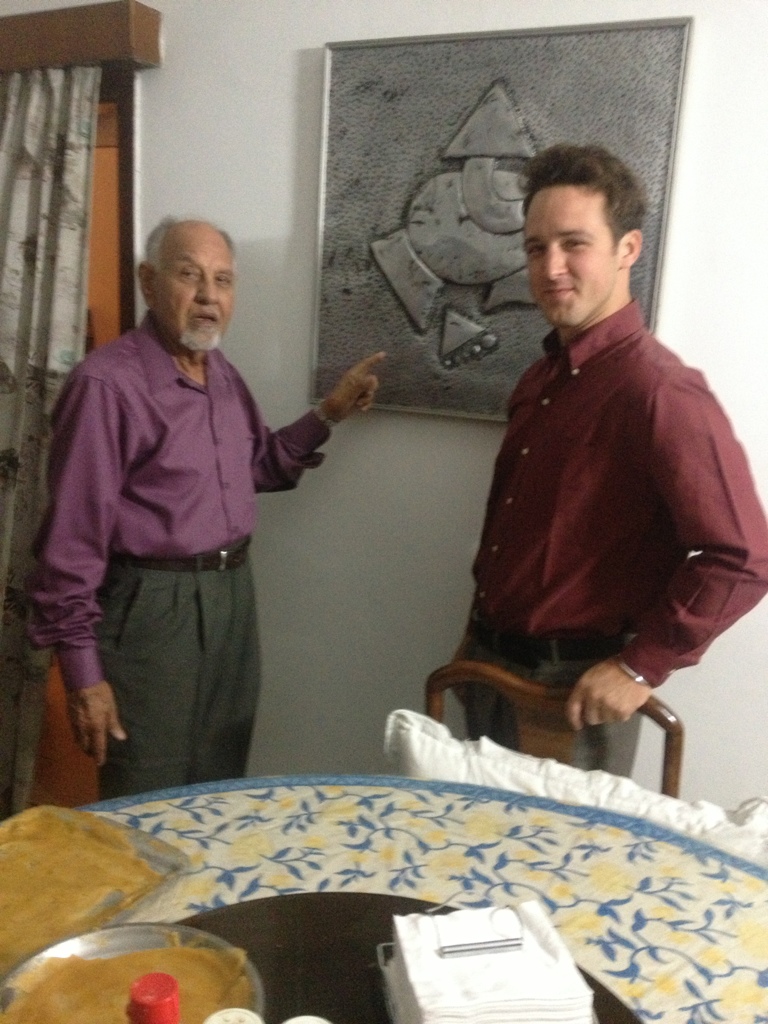 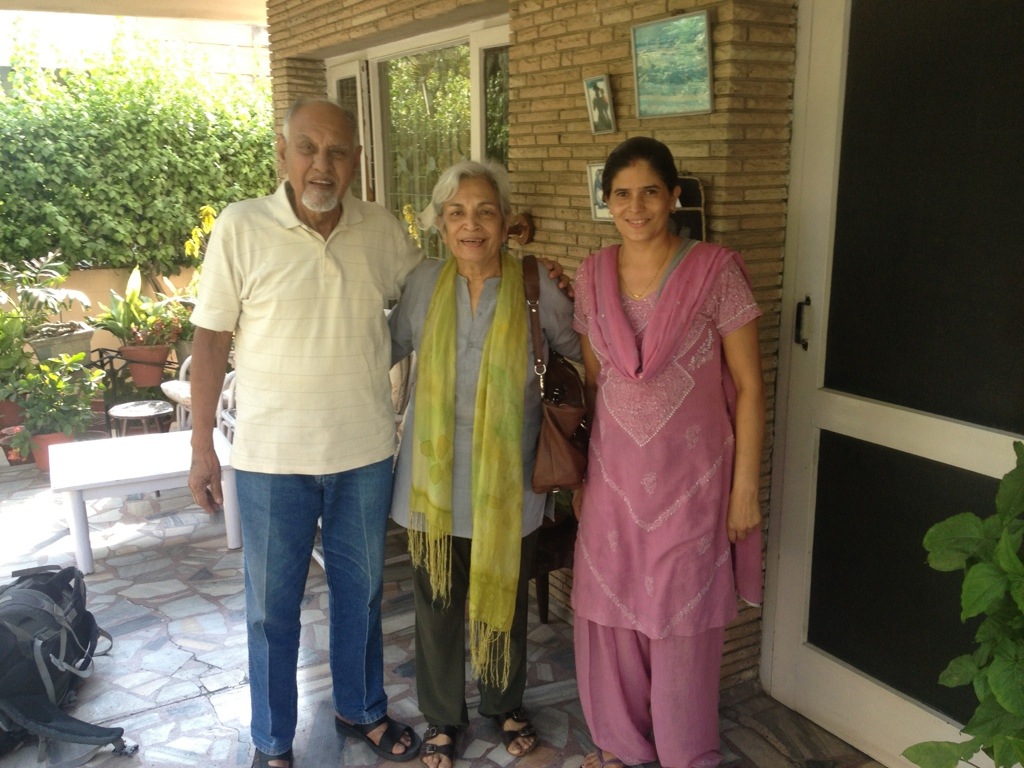 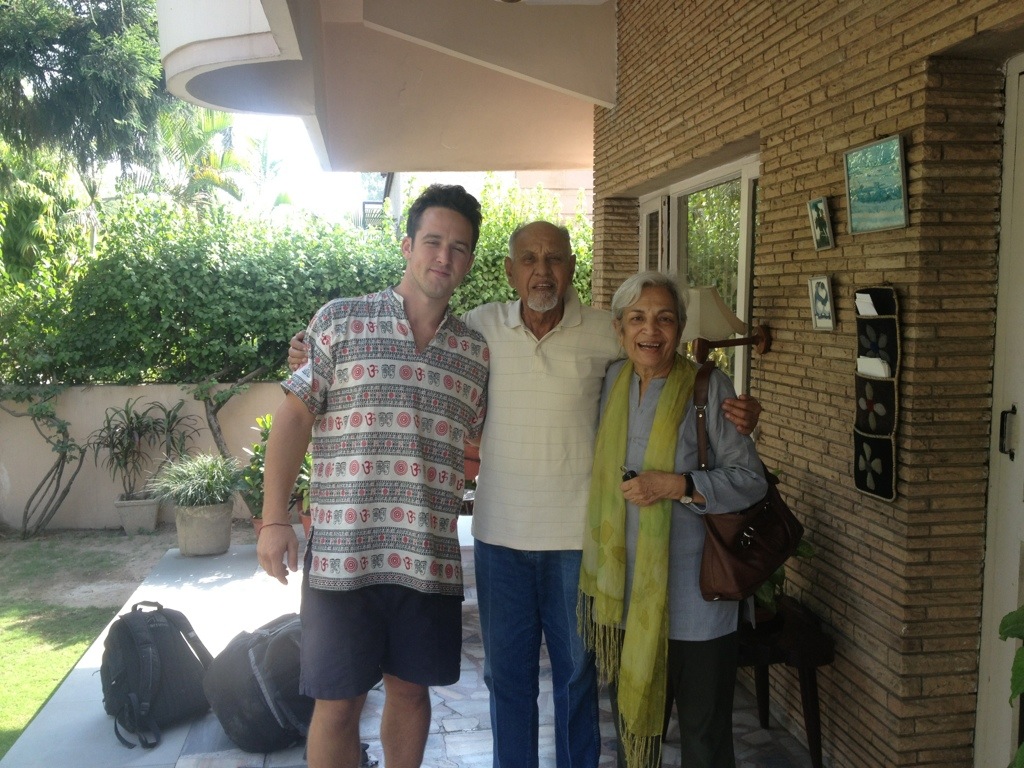